Where We’ve Been So Far

Midway into our pilgrimage, we’ve already visited several sacred sites, all of which are rooted in ancient monasticism.

Durham Cathedral: Originally the burial shrine for the remains of 7th century saints St. Cuthbert and the Venerable Bede, it became a Benedictine monastery in the 1080’s, with the current structure being built shortly thereafter. In 1541, it became an Anglican cathedral following the Reformation. Scenes from the “Harry Potter” movies were filmed in the Chapter House and the Cloister.

Whitby Abbey, site of the first “co-ed” monastery of men and women, was founded by Abbess St. Hilde in 657 AD. The Synod of Whitby, which determined the calculations for the date of Easter each year, was held here in 664 AD. Abandoned prior to 1000 AD due to Viking invasions, it was reestablished as a Benedictine monastery shortly after the Norman settlement of England in 1066. Its ruins have lain ominously over the Village of Whitby since King Henry VIII destroyed the monasteries in the late 1530’s. The property was inherited by Lord Chomoley in the 1600’s, who built the adjacent house. Bram Stoker set part of his novel DRACULA at this location.

St. Paul’s Church in Jarrow, was built as a monastery in 681 AD using stones from an abandoned Roman outpost. Its small round stained glass window is the oldest in the world. St. Bede arrived as a child oblate at age 7 and served here as a monk until his death in 735. The Vikings sacked it in AD 794. It was repaired in 1074 and re-founded as a daughter house of the Benedictine community at Durham. It became a parish church following the dissolution of the monasteries by Henry VIII in the 1530’s and remains an active congregation to this day. 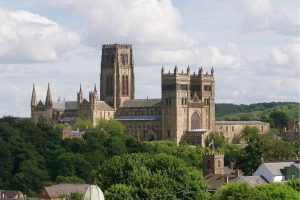 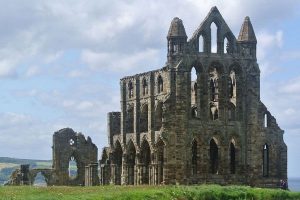